Organic Chemistry has now matured into a major scientific discipline. Over 95 % of the chemical compounds and roughly half of the present chemists are organic chemists. Rapid advancement in the field of organic chemistry is due to the fact that organic chemical industry plays a major role in the world economy and because organic compounds are literally the “stuff of life”. In keeping with the growing demand for post graduate course in organic chemistry, the M.Sc (organic chemistry) was started in the parent SKBR College with an intake of 27 students on 19th July 2006 under the Directorship of Dr.E.R.Subrahmanyam. Eminent personalities like Dr. ASP Vittal also worked in the department. Later the AU authorities increased the intake of students to 33 and then to 36. As Dr.ER Subrahmanyam garu was promoted as principal of SKBR PG College, Mr. KVVSN Murthy has been appointed as Head of the Department of Organic chemistry on 1st September 2014. Equal importance is paid for theory and practical. The results are also good. As a part of regular study guest lectures are being arranged every year. Stalwarts like Prof. YLN Murthy (AU), Prof. G.S.N Murthy, Prof P.V.Krishna Rao, Prof P.Achutya Ramiah, AU, Prof B.Jaganmohan Reddy, AKNU and others have delivered their guest lectures. Study visits are being conducted regularly to expose our students to application of theoretical principles in industry. The important places visited include Dr.Reddy Labs, Yanam, AP Sugars, Tanuku, AP Horticultural University, Ambajipeta, YSR Horticultural University, Tadepalligudem, ONGC Mini Oil Refinery,  Tatipaka, Water Analysis Centre, Kakinada, NFCL , Kakinada , CTRI,Rajamundry, Regency ceramics, Yanam,  Gowthamy solvents, Tanuku, AVR Chemicals, Yanam and Mangrove Forests near Sacremento Light House, Kandikuppa etc.,   A training camp for school teachers was conducted in our department to improve skills in practicals to introduce and explain the topics strikingly on 10-09-2011. A one week workshop was conducted in the department on Instrumentation techniques on HPLC&GC in collaboration with Active Pharma Labs, Hyderabad from 31-01-2011 to 05-02-2011. The Department has well equipped separate Laboratories for conducting Organic, Inorganic and Physical Chemistry Practicals. There are eight staff members, one store keeper, two lab assistants and one sweeper. Head Of The Department

Designation: Head of the Department 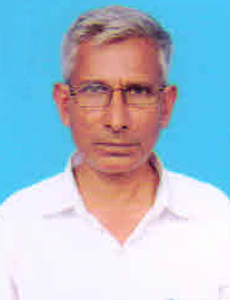